Want to advertise on this website? Create your advert now.

The briefing paper - what's needed and why 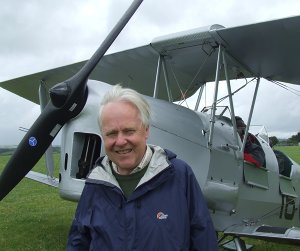 The case for a Universal Community Events License

• Richard Searight of Tavistock wants to see an end to the crippling legal regulations that people face when putting on a fundraising event. He proposes replacing the myriad of forms and fines that usually put people off holding events, with a simple permanent license.

• To illustrate the issue, his plan is to run legal protest events run all over the UK when charity cheques are symbolically torn up. If the money raised at any such event is given to a good cause the organisers could face fines up to £20,000 or 6 months in prison.

• The only legal way to hold such an event is to exclude the community and not raise money. This is entirely legal because it is completely useless as a fundraising effort.

• The first of these mass-cheque-tear-up events will be held in Devon on 5th, 6th and 7th July to demonstrate how the current legislation governing events licensing is preventing simple community fundraising activity.

• Larger charities and businesses can afford to spend the money and time to jump through the multiple hoops required; small community organisations, and groups of volunteers cannot.

• The penalties for holding an event that breaches licensing restrictions are severe, and organisers can be subject to a £20,000 fine or 6 months in prison if a misfiled application results in a prosecution.

• Equally communities cannot afford to have police officers policing their events at up to £75 per hour.

• As a result, rather then fall foul of the law small community events are simply abandoned, often in a late stage of planning, and community life suffers greatly as a result.


The law as it currently stands

• The present licensing regime was introduced by the Licensing Act 2003. Under the old regime, the sale or supply of alcohol and the provision of entertainment were governed by separate legislation and licensed separately, by the local magistrates and local authorities respectively. Under the present system all these activities are covered by the same license, administered by the local authority, but tailored to the specific nature of the premises by means of operating conditions. Thus the same license might allow the licensee to sell alcohol and to provide music and dancing during an agreed period on the premises.

• The “premises license”, can be granted to a named individual or a company, and if the holder changes a transfer of the premises license will be needed.

• The “occasional” permissions granted under the old system have been replaced by “temporary event notices” (“TENs”). TENs can be used to authorise relatively small-scale ad hoc events held in or on any premises (indoors or outdoors) involving no more than 499 people at any one time.

• Each event covered by a TEN can last up to 96 hours and no more than twelve TENs can be given in respect of any particular premises in any year. The holder of a personal license will be able to give 50 TENs each year instead of the limit of 5 for those without personal licenses. A temporary event notice costs £21.

• If regulated entertainment is being provided at a charitable event to which the public is invited, a premises license or temporary event notice would be required. Private events, where the invited guests are charged, either with a view to private profit or to raise funds for charity, are licensable.

• However, entertainment provided at a private charitable event where the public is not invited (other than where the entertainment is provided exclusively for the members and their guests of a qualifying club) and where no charge is made (other than solely to cover costs) or requirement for the guests to give any money to charity would not be licensable.


Case Study- the law in practice

• Organisers in Devon attempted to set up an event designed to bring over a dozen local church communities together using flights in a vintage Tiger Moth as the prime attraction.

• This promptly had to be cancelled due to a range of regulations. The pilot for the event, a professional pilot with over thirty years experience, was not deemed competent for ‘charity’ events.

• Initially the group tried to avoid this hurdle by categorizing the event as a private one. In order to do this however, the group had to;
1. Avoid any fundraising associated with the main attraction, in this case the aircraft;
2. Avoid selling drink – or get a license
3. Avoid any live entertainment – or get another license
4. Avoid playing music - or get a license

• There were thus no discernable benefits from compliance itself.

• Mathematically speaking, the risk of participants suffering death or injury at the event was a fraction of that which would be incurred driving to attend.

• A busy village hall is often the hub of community life, and will often host charity events as well as community celebrations such as weddings and birthday parties.

• These events not only bring the community together but provide the village hall with enough funding to carry on operating in the long term without the need for grants.

• However, village halls are increasingly forced to apply for expensive Premises licenses, as the system of ad-hoc Temporary Events Notices are inadequate.

• As only twelve of these are allowed in any year and only one per calendar month, the activities that take place in a hall are severely restricted. Events on consecutive nights are not allowed and the hall is forced to stand empty for the majority of the year.

• If owners wish to apply for a Premises license, they then have to nominate a person to be a “Designated Premises Supervisor”. This person will have to go on an extensive training course, at their own expense.

• Once they have accomplished this, the Supervisor personally responsible for all sales of alcohol, be present at each event, and liable for any breach of the law. As nobody is willing to make themselves liable, it is very difficult to secure a license.

• As a result, many financially viable and sustainable village halls are being forced to either close or depend entirely on money from sources such as the lottery and Local Authorities.

What can be done?

• One idea would be to reform the licensing system to create a ‘universal license’, aimed at small community groups and local charities and designed for simple, low risk, and relatively small community events.

• Such a license would not be limited to a single event but rather a general permission for small groups to operate within certain restrictions and parameters. This would avoid the need to duplicate applications, reduce paperwork and encourage smaller local events held for a village, street or small community.

• Ideally, such a license would be;
1. Available for free, or at a low cost.
2. Be permanent or cover a generous time period, subject to withdrawal
3. For up to 1500 people - to cover normal community sized events
4. Associated with an organisation such as a church, club, village hall, WI or community group, as opposed to an individual.
5. Flexible, to allow multiple small events organised at reasonably short notice, rather than for any specific event.

• Enforcement would simply involve the license being immediately withdrawn were it misused. 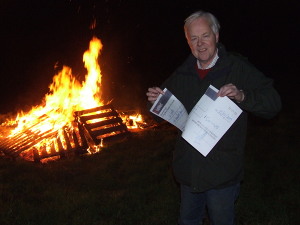 To the right you can see a photo of myself tearing up a cheque for hundreds of pounds at our Chillaton bonfire party.

You will remember that we have to do this in order to comply with current (manic) government event regulations. But for the regulations, which would have required us to have prohibitively expensive insurance plus a Temporary Events Licence etc… the event would have raised £529 for the local church. However compliance with all the government regulations and licenses would have cost more than we would have made. The only way to make the event legal was to ensure that no charity benefited from it.

I have been running bonfire parties safely for 30 years - and nobody has been injured yet. The only contribution the current regulations make is to ensure that charities don’t get any of the money. Charities are estimated to lose tens of million pounds a year as a direct results of events ‘not’ being held for them – due to government regulations.

This is all part of an ongoing campaign to run useless events around the country. The first was launched this summer by our MP, Geoffrey Cox, in a vintage Tiger Mother plane when he tore up a £500 cheque – necessary or the organizers would have faced a £20,000 fine or 6 months in prison. The only way the event could proceed legally was to ensure that no charity benefited – by tearing up the cheque.

Please see www.communityevents.2day.ws for full details and to sign our petition on the 10 Downing Street website. Our objective is to get our legislation into the Conservative Parties election manifesto

Please feel free to ring me any time for more information.

This Microportal is built on the 2day Microportals platform which provides you with 3 click access to local and global information crucial both to your personal and working life. The platform provides live local data on transport, what's on, accommodation, eating out, shopping, sport, religion and weather as well as comprehensive reference and resource sections including TV, radio, online shopping, route planning, health, education and more.